Satan in the Gulf of Mexico!

Filed Under Christianity, Prophecy, The kingdom of heaven 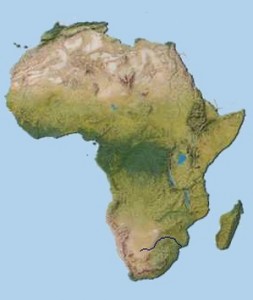 Have you seen the engraving of Satan on the continent of Africa? Yahweh stated in Zechariah 3:9:

“ ‘For behold, the stone that I have set before Yahshua; on one stone are seven eyes. Behold, I will engrave an engraving on it,’ declares Yahweh of hosts, ‘and I will remove the iniquity of that land for one day.’ ”

Yahweh chooses large stones, and very clearly He engraved on Africa an engraving of Satan. To see this, go to The Signs That Cause Belief, page 4 and scroll down until you see the image of Africa. Study it carefully and you will see Satan’s little horn on his forehead, addressed in that writing. If you go to the bottom of that page and click to view the next page, you will see other remarkably clear evidences as well.

But this is not all that Yahweh performed on this earth to testify of that image and Satan’s clear fate. He provided a highly revealing second testimony as well. Click here to look at the image of the place where so many of the hurricanes that have spoken to us in the last few years have taken place.

This, of course, is the Gulf of Mexico. Do you see anything that looks familiar? If not, click here and be prepared, once again, to see Yahweh’s amazing attesting truth that only the Bride has been given to reveal.

Once again we see Satan. First, the Gulf of Mexico is a near-perfect shape of the cranium of Satan as revealed in Africa. Also, in an undeniably affirming testimony, just as the boot of Italy is crushing the head of Satan in Africa, so Yahweh designed it that Louisiana is shaped like a boot and provides precisely the same testimony of crushing the head at precisely the same location!

And, most notably, Satan’s horn is cut off! To see this more clearly, click here. In this graphic we have taken the shape of the Gulf of Mexico and in it recreated Satan’s image engraved on Africa so that we can see what Yahweh is speaking to us from the Gulf.

It is quite fitting that this area is called the “Gulf.” This speaks clearly to the breach—the great gulf that separates the two olive-tree Remnants that are addressed in chapter 4 of Zechariah, immediately following the statement about Satan in chapter 3. This is the breach of Christianity where Satan has afflicted the body of Christ for 2,000 years. More on this in a minute.

Also, something I have never seen before now, you will notice in Africa, and remarkably confirmed by the shape of the Gulf, that Satan has something on his head. Look at one of the images of Africa where it fits into the accommodating indented area along the Texas coast. This would be just behind Satan’s crushed head. What is it? It is what the Jews call a skullcap, or kippah. The Catholic priests wear the same, calling it a zucchetto. The origin of this headcovering is the Babylonian Talmud, speaking to a work and time of bondage and judgment. Why would Satan wear a skullcap? First, you will recall that Yahshua said specifically to the Jews:

“You are of your father the devil, and you want to do the desires of your father. He was a murderer from the beginning, and does not stand in the truth because there is no truth in him. Whenever he speaks a lie, he speaks from his own, for he is a liar and the father of lies” [John 8:31, 44, 48].

Thus, their skullcap continues to reveal their identification with their father, Satan. Furthermore, we read in 1 Corinthians 11:4, “Every man who has something on his head while praying or prophesying disgraces his head.” True for both the Jews—who say, “We do not want this man to reign over us” (Luke 19:14)—as well as rebellious Satan, who is their father, they reject Yahshua. Therefore, as a testimony of their rejection of Him as their head, they wear a headcovering. The same is testified with the Catholic priests. Of course neither of these know it means this; but Yahweh and the angels know, for it speaks truth. And now you know this truth as well.

As is true in so many ways with all men, clearly, physical appearance speaks. So ladies, if you are appalled at the Jews’ and the Catholics’ skullcaps, you do the same thing—attesting to your own rejection of Yahweh’s authority by praying with your heads uncovered, or by attesting to usurping the man, who has been given as your head, by wearing pants or cutting your hair short like him. As the original Garden curse foretold, your dress and lack of headcovering equally speak that you seek the place of the man. There is no difference between these skullcaps on Satan, the Jews, and the Catholics, and your uncovered state. Both speak the same thing. If Yahshua was in fact the head of men and women, then the men would circumcise their heads and thereby remove the headcovering, and the women would order themselves as women and not as men.

In addition to Satan’s head being unmistakably crushed by specifically a boot in both of these testimonies, in the Gulf of Mexico we see testified that the little horn is broken off by the rod (Florida)! This is most encouraging, as this is precisely what the latter rain twelfth apostle rod effects—removing Satan from his place. This is accomplished by the serpent turning back into a rod. The serpent loses his place.

And with the election of second-Remnant-representing George W. Bush in 2000, what state was it that broke off the horn of Gore? Florida! Yahweh indeed prophesied in that election, which in itself is a most interesting term. The horn that gores is broken off with the election of the second Remnant rod.

Furthermore, one must ask the question as to why Yahweh placed this image of Satan formed by the Gulf in this location? The answer—America prophesies of the kingdom of heaven. Even as the moon (that rules the night, Satan) is placed under the feet of the sun-clothed woman (Revelation 12:1), so Satan will be placed under the feet of the kingdom of heaven—testified by the Gulf under America. This dominion over Satan is effected by the second-Remnant Bride. You will recall that the woman, Jael, drove the tent peg into the head of Sisera (Judges 4:17-21). Even so will the Bride defeat Satan. (See The Signs That Cause Belief, page 5.)

Now for one final word regarding this rock upon which Yahweh engraves an engraving. The fact is, Africa and the Gulf of Mexico are both attesting types of the true fulfillment of Zechariah 3:9, that is—the church. In Matthew 16:18, Yahshua states, “I also say to you that you are Peter, and upon this rock I will build My church; and the gates of Hades will not overpower it.” This statement is found only in Matthew. As we have noted in The Key To Their Understanding, Matthew speaks to the first Remnant. Thus we see that this promise applies specifically to the first Remnant.

It is in fact upon the first Remnant that Yahweh has built His church for 2,000 years. They were the beginning foundation stone that Yahshua laid. But, the church was turned over to Satan when Yahshua left. So, when Yahweh said—“For behold, the stone that I have set before Yahshua; on one stone are seven eyes. Behold, I will engrave an engraving on it”—He was speaking of engraving the engraving of Satan on the church!

In The Signs that Cause Belief, page 4, we noted that Africa is in fact Christianity. Thus we see attested in Africa precisely what Yahweh did to the church—He engraved Satan on it! In another visual testimony of this, even as the skullcap on Africa attests to the skullcaps on Jews and Catholics (even Messianics), so the little horn on Africa attests to the steeples on church buildings. Do you see then that Yahweh did indeed engrave on the church, the initial rock, Satan’s image? The little-horn steeples alone tell us so. Satan has corrupted the church for 2,000 years.

Where then is our hope? In that same verse Yahweh continues, “and I will remove the iniquity of that land for one day.” What “one day” is He speaking of? Clearly, it is the day of the millennial reign when Yahweh removes the iniquity from the church! This is the day when Satan is bound for 1,000 years, and afterwards is released for a short time. He is then thrown into the lake of fire (Revelation 20:1-10). Thus Yahweh effects His purpose for Satan relative to the church, and will now be replaced by the Bride.