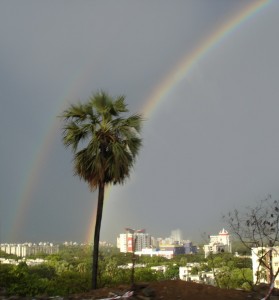 In the next posting, I will tell about the teaching journey to the east that was just completed, as well as our hope for the days before us. But in this posting, let me share with you some of the wonderful truth that was revealed while on that journey. Truth is what will set us free; and truth, a seamless garment of truth, is what Yahweh has given the Bride.

I have already shared with you the truth that came to light regarding the three sabbaths—the seventh day, the eighth day, and the fourth day. In the extraordinarily revealing writing, The Great Tribulation, we note that what the Bible calls the “great tribulation” or the “great and terrible day of Yahweh,” has been taking place for 2,000 years. It is the corruption and desolation of the kingdom of heaven and its members. And, we are told in Matthew 24:22 and Mark 13:20 that unless those days are cut short—from three to two—no flesh would be saved!

What then, we must ask, can and does cut those days short? In Malachi 4:5-6 we begin to understand the answer to this:

“Behold, I am going to send you Elijah the prophet during the coming of the great and terrible day of Yahweh … so that I will not come and smite the land with a curse.”

It is the Elijah then that reverses the curse! (Read The Great Tribulation, page 4.) But let us now add even more revealing and confirming evidence regarding this.

We in fact find in those verses in Matthew 24 and Mark 13 that they too identify this same effectual work. From the New American Standard Bible, in Matthew 24:22 we read:

“but for the sake of the elect those days will be cut short.”

“but for the sake of the elect, whom He chose, He shortened the days.”

However, as one Bride brother noted at the outset of the trip, the phrase “for the sake of,” used in both of these verses, is a poor, misleading, and inaccurate translation. The Greek word used in both cases here is “dia.” Its meaning has to do with something being effectual in nature and in purpose, and thus means “on account of” or “because of.” But even more accurately and revealing, dia is far more often translated—221 times—as “through.” Therefore, the accurate translations of these two verses are:

“but through the elect those days will be cut short.”

“but through the elect, whom He chose, He shortened the days.”

The message then is that the elect actually effect those days being cut short! Because of their work, the days are cut short. Who then are the elect whom Yahweh establishes as the Elijah company in order to cut the three days of Christianity short to two? It is the Elijah Bride, the second Remnant. They are the obedient people who please Yahweh, who walk in truth that has never before been seen (Yahweh’s back), who prepare the way for Immanuel, and who will rule and reign with Him for a thousand years. This account is indeed both marvelous and encouraging to see. Let us now look at yet a third testimony.

While also on this trip, someone brought to my attention Zechariah 5. As I continued to read into chapter 6, it too confirmed this very truth regarding the effectual work of the Bride. First though, it is obvious that the flying scroll at the beginning of chapter 5 that is twenty cubits by ten cubits and is “the curse,” represents Christianity. Why? The dimensions of this scroll are the very dimensions of the holy place. We clearly see that the holy place that is equally twenty by ten cubits, even 2,000 cubic cubits, is the 2,000 years of cursed Christianity that precede the 1,000-cubic-cubits holy-of-holies Millennial Reign.

Also in chapter 5, immediately after the cursed flying scroll was an ephah that, like the scroll, was equally going forth. We find that these two, the scroll and the ephah, are indeed one and the same—Christianity. In this account, two women “with the wind in their wings, and they had wings like the wings of a stork,” carried off to Shinar the ephah that contained a woman who is Wickedness, and a lead cover or weight was placed over it. These two women who were given the wings of a stork are the two Remnant. The Hebrew word for “stork” is “chasidah,” which is the feminine form of the word “chasid,” which means “godly.” (Would that women would once again regard motherhood as their godly purpose and pursuit.) The ephah with the lead cover placed over it, is the same as the Exodus 33:22 account where we see that Christianity is likewise placed in the cleft of the rock with Yahweh’s hand placed over it. Shinar is another name for Babylon, so Wickedness here is the same as “Babylon the great, the mother of harlots and of the abominations of the earth” (Revelations 17:5). Again, both are Christianity.

Now back to the question regarding the Elijah work. This then led me to continue reading into chapter 6 where we find in verse 1: “Now I lifted up my eyes again and looked, and behold, four chariots were coming forth from between the two mountains; and the mountains were bronze mountains.” Bronze is equally Christianity, and as I read this account the consistency of this was about to be tested. Whatever transpired next, had to evidence something that would take place between the bronze mountains of Christianity’s Moses work and its Elijah work, each being 2,000 years (A Lesson From Intercession, page 7). This redeemed and fulfilling “breach” between the two bronze mountains is the Millennial Reign, and this is precisely what we find here.

In verse 12 we read concerning the coming of the Branch, who is Immanuel: “He will branch out from where He is; and He will build the temple of Yahweh. Yes, it is He who will build the temple of Yahweh, and He who will bear the honor and sit and rule on His throne. Thus, He will be a priest on His throne, and the counsel of peace will be between the two.” The “two” spoken of here obviously refer back to verse 1 which begins all of this by noting that “four chariots were coming forth from between the two mountains; and the mountains were bronze mountains.” Clearly, Immanuel does indeed set up His throne and the counsel of peace in the Millennial Reign, and this takes place between the two bronze mountains of Christianity.

Having now seen this, let us examine the attesting matter of the Elijah work. In verse 8, we note that a chariot with black horses and a chariot with white horses, which were the “spirits of heaven,” went to the north country. And most significantly, it then states that these two appeased Yahweh’s wrath. Once again we see here the Elijah work that does indeed arise at the beginning of the Millennial Reign so as to avert Yahweh’s wrath.

It is also noteworthy that of the four chariots “coming forth from between the two mountains,” one was actually not sent out. This was the chariot with the red horses. Given that Satan is identified with the color red, as well as the fact that he is bound for the 1,000 years of the Millennial Reign, it seems quite relevant that the red horses were distinctly absent.

Also, dappled horses were sent to the south, but they are not mentioned again either. Significantly, the Hebrew word for “dappled” is “barod,” which comes from the word “barad,” which means “hailstones.” Obviously this speaks of judgment. It is quite noteworthy that the judgment did not appease Yahweh’s wrath. Yes, Immanuel will rule with a rod of iron, but it is repentance and obedience that appeases Yahweh’s wrath. Therefore, again we see yet another testimony of Yahweh’s wrath being appeased by the Elijah.

I suggest you read all of Zechariah 3 thru 6. You will see that all four chapters are a rich source of distinct prophetic testimonies pertaining to the church. Chapter 4 of course addresses the clear pattern of the two sons of fresh oil, the two olive trees, that are separated by the seven-branched lampstand—the two Remnant separated by Christianity.

Thus we see in chapter 4 the pattern of the two Remnant separated or split by Christianity—the two olive trees separated by the lampstand. In chapter 5 we see the same whereby the two godly Remnant with wind in their wings are split by cursed and wicked Babylonian Christianity that is in an ephah and covered with the lead lid. But not only do these chapters reveal this split of the Bride, but then go on to reveal the split of the Body! In chapter 6 this pattern is replicated for Christianity in that the Millennial Reign separates or splits it—the two mountains separated/split by Immanuel building His temple and establishing the counsel of peace. Thus we see in these three chapters:

Again, it is truly incredible how in these three chapters both like patterns are set forth, revealing the splitting of the Bride, as well as the Body, so as to make them clean. But also, and such is the main purpose of this writing, we see that it is indeed the Elijah Bride work that reverses the curse. Through, or because of, this elect company the days of the great tribulation are cut short to two, as the second Remnant are sent out in the Millennial Reign in order to appease Yahweh’s wrath.

Oh the marvels of Yahweh’s word that consistently evidences these truths that the Bride is seeing. Blessed be His name forever!

Photo: There are two things in the signature photo accompanying this posting you should understand. First is the double rainbow that attests to the two Remnant, with darkness/Christianity separating them. (Read “When Yahweh Sees The Rainbow.”) These are the two immutable promises about which is it impossible for God to lie (Hebrews 6:17-20). They are the two-part Bride work that indeed reverses the curse, which is the promise of the rainbow.

The second thing is the palm tree. The Hebrew word for “palm tree” comes from the word “tamar,” which literally means to be “erect.” This tree is thereby prophetic of the rod, even the male, and is a torch as we saw passing between the split covenant parts. Also, even as the branches from the head of this tree were laid out so as to prepare the way for Yahshua, so the truths that come from the head of the Elijah who stands in the office of Immanuel will be laid out so as to prepare the way for His coming. These are the truths that effect cutting the days of Christianity short.