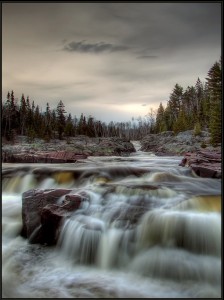 Thus we see that the four rivers dividing from the river flowing from Eden that watered the Garden, the original kingdom of God, and their descriptions were:

Pishon: “flows around the whole land of Havilah, where there is gold.  The gold of that land is good; the bdellium and the onyx stone are there.”

Gihon: “flows around the whole land of Cush.”

Considering that the Garden of Eden is the type of the kingdom of God, quite obviously these four rivers coming from one river that flowed to the Garden bear remarkably important testimonies.  What then are their meanings, and even more importantly their fulfillments?

“For Yahweh has created a new thing in the earth—A woman will encompass a man.”

Do you now know the answer to the meaning of the four rivers?

First, since this water flows in the original kingdom of God, it is certain that they speak of four essential outpourings of the Holy Spirit that water and bring forth life and fruit in that kingdom.  So, one must now ask what these four outpourings are?

Actually, this hint above relates only to the first two rivers.  But, it is in understanding these two, as well as the specific quality of this identification, that makes more certain the identity and meaning of the latter two.  Also, understanding these first two rivers gives us great hope for today, not only that we have an opportunity unlike anyone before us, but also demonstrating the certainty of the seamless nature of this truth that the Bride has been given—this marriage feast of the Lamb.

The uniqueness of these first two rivers is incredibly revealing, insomuch that, as the Bride, they alone encompass.  As it is written in Jeremiah, they are the female works that encompass the male.  They are the two-part Bride, the Leah and the Rachel.  That is why these two rivers encompassed Havilah and Cush.  They evidenced the Bride that encompasses the body of Christ.  This identification is remarkable and quite clear and substantiating.

Now you see the incredible and affirming testimony regarding these first two rivers—how they clearly attest to the Bride in that they alone encompass.  In clear contrast, the Tigris aptly identifies the body of Christ, a male work.  As a male, it does not encompass as a female, but rather is one-directional, therefore it is stated—it “flows east of Assyria.”  These three make up the Jacob and his two-part Bride.

So what about the nations?  You will notice that the Euphrates completely lacks any definition—simply stating, “Euphrates.”  Why?  Obviously, the nations will have no part in the procreation of the kingdom of God attested to by the three other rivers, the Bride and the body.  Why?  What could this distinction mean?  Because the nations will be the eunuchs who serve the house.  As in every cell, it is the nucleus that regenerates—these are the priesthood.  All else in the cell serves the cell.  Such it will be in the kingdom of God—the Bride and the body are the nucleus, the temple in the court.

Another thing that is particularly confirming and encouraging for us today is the fact that the second Remnant work is here identified with Gihon, the very thing we have been writing about.  Gihon is the “bursting forth” of the Spirit and the Solomon work after 2,000 years of being concealed, bursting forth at the pool of Siloam/Shelah, the third-part Millennial reign (Tabernacles Pentecost, 2008, page 3).  Thus, Gihon is indeed clearly identified with the second Remnant, its timing, and its work.

We just noted that Havilah and Cush represent the body of Christ.  How so?  First, of course, is the fact that they are encompassed by these two rivers.  As we read in Jeremiah 31:22, the male is encompassed by the female.  In like regard, the womb encompasses the male child.  The holy of holies cube encompasses the ark of the covenant.  The new Jerusalem Bride cube is temporarily lacking the male temple (Revelation 21:22).  Thereby, the Bride will encompass the body of Christ.

In addition, both Havilah and Cush are identified with Africa, which, as addressed in The Signs That Cause Belief , is, once again, Christianity, the body of Christ.  Cush is the ancient land of northeastern Africa where the descendents of Cush settled.  Of course this is the very thing addressed in the book, The Curse of 1920.  Cush is the oldest son of Ham, and the descendents of Ham populated Africa.

Havilah has an equal identity with Africa.  In Genesis 2 it is stated that the gold in that land was good.  Also addressed in The Curse of 1920 and The Signs that Cause Belief, page 4, we note that the gold to build Solomon’s temple came from Africa.  The name, “Africa,” is undoubtedly derived from this land where Solomon obtained this gold—the land of Ophir.  Af-ric-a, comes from Ophir-ric-a.  It seems quite revealing that in both Genesis 10:29 and 1 Chronicles 1:23, Ophir and Havilah, two descendents of Shem, are cited together.  However, it is to be noted that Havilah is a son of Cush, the son of Ham, as well.

So, clearly there is the testimony of both Cush and Havilah with Africa.  And addressed in the above writings, Africa prophetically represents and speaks to the body of Christ.  Thus we see yet another testimony that both Pishon and Gihon are the Bride that encompasses the body of Christ.

Of the four rivers coming from Eden, Pishon has already been fulfilled.  Gihon is surely about to come.  It will be almost 3,000 years before the Tigris flows.  And even later will be the Euphrates.  But when they all four are established, the kingdom of heaven will be established upon this earth, the Garden will be fulfilled.  But for now, we look to Yahweh God for Gihon.  May it indeed burst forth and establish this second Bride.

PS – You can listen to Gary address these matters and more by going to Remnant Bride Radio and listen to the January 9 program, “Four Rivers From Eden.”  Chris Meier makes the comment that, though he read this material you just read, it was this program that really made it clear for him.  Other matters are discussed as well.  Here is the program description:

In Genesis, we read that four rivers came from one river that flowed out of Eden, watering the Garden.  Clearly this prophesies, as the Garden of Eden is a seed, a foreshadowing type of the kingdom of God.  In this broadcast, Gary reveals what the fulfillments of those four rivers are and what they will each effect.  We find clearly testified here Yahweh’s plans to establish His kingdom, His Garden, on this earth.  Gary also notes that “Eden” means “pleasure,” and examines how this is evidenced in man.  Related to this, he and Chris discuss the conflict between going by one’s emotions or by government.  If you want to know the end, listen to this revealing examination of “In the beginning.”