If you question what this 2008 presidential election attests to and where this new Obama administration will lead the kingdom of heaven at the nations level, America, then look at Michelle Obama’s election-night celebratory dress that, rightfully so, evoked strong public reaction.  Clearly, she evidences the Curse of 1920, the very testimony on the cover of the revealing book, The Curse of 1920.  She is the black widow spider, Yahweh’s testimony of the women’s rights movement that is destroying this nation and the world.  Note the two classic red hourglass portions on black.  For more information regarding the amazing and highly revealing testimony of the black widow spider, read Appendix 5 of The Curse of 1920. 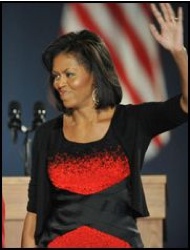 We have also been noting of late the identification of Satan with the color red.  Therefore, in like testimony you will notice the dress their daughter wore.  For the sake of further truth regarding this testimony of red and Satan, it is significant that our blood is red.  (It is never blue, despite that appearance when looking at our veins through our skin.)  Our bodies that have their life from this blood are at enmity against Yahweh God, are the seat of sin, of this cursed earth, and must be buffeted and put away.  They are also the product of the serpent being cast down to the earth—the sperm being cast down to the egg.  It is also appropriate that no flesh could be eaten with the blood, and it was forbidden to eat any blood (Genesis 9:4, Leviticus 17:14, Deuteronomy 12:16).

Considering that this red blood in fact attests to the life of the flesh—Satan—is it not obvious why it is in fact red?  It is also quite revealing that when blood was shed, it had to be covered with earth.  Also, you will notice that when Yahshua returned to this earth in an incorruptible body following His resurrection, He did not have blood in Him—“touch Me and see, for a spirit does not have flesh and bones as you see that I have” (Luke 24:39).  Thus we see these evidences from the Obamas concerning red and the black widow spider.

In the September 8 posting titled Prophetic Types: Election 2008, I concluded:

Did Yahweh indeed attest to good?  To the contrary, He attested to evil.  Will He work good and not evil towards the establishment of His kingdom in 2008?  That hope indeed continues.  But the fact is, there is no other hope for this nation or for the kingdom of heaven except for what Yahweh will perform through His Bride.  I noted in that same posting:

Could I vote for Obama?  Absolutely not!  Politically, the Democrats are the epitome of feminism, the Curse of 1920.  Can I then vote for McCain/Palin?  Once gain, no.  Why?  Because, though the prophecy is favorable, on the practical and real-life level, a woman in government is the Curse of 1920.  Women are not to be in governance, which belongs to men.  What we must have is what McCain/Palin speak to—the Elijah, preparing the way for Yahshua, who establishes the true kingdom of heaven on earth.  The fact is, the nations and man levels utterly fail.

The latter was clearly demonstrated on November 4 when Americans cast their vote for imaginary “change.”  Was it really change?  Not at all.  It was the deception of Satan, for all Obama offers is even greater advancement of the Curse of 1920—the Obama-nation that makes desolate.

Since 1920, America has refused to turn away from this Curse, and in fact got what it deserved in this election.  This Curse has killed literally millions of people, destroyed the family, destroyed morals, aberrantly confused the sexes, detrimentally altered the judicial system, and given us an altered government that is bringing us to the brink of destruction.  Obama and the Democrats will only continue and more actively advance this multi-headed-beast fate.

As noted in The Curse of 1920, the primary root of this destructive Curse originated in Quaker women and the black man from Africa.  It is quite revealing that these are the very two candidates that the Democratic Party offered for the office of the President of the United States—a woman and a black man who very possibly was even born in Africa.  And quite amazingly, a black man will soon be our President.

But Republicans did little better in their candidate—a compromising moderate with a woman for VP.  Even the vanguard of Conservatism, Rush Limbaugh, received what he deserved as well.  Having divorced three wives and is a proponent of rock and roll and supports women in governance, he too received a president that is consistent with this Curse that he advances by these actions and beliefs.

We look to Yahweh to establish His Elijah work—our hope.